80stees.com and Direct To Garment Print

Pay in 4 interest free payments of just $9.99 with

Guaranteed to be Free From Defects

Printed
in the
U.S.A.

This 80sTees.com exclusive North Shore t-shirt features the logo for Chandler Surfboards that appeared in the surfer movie.

In the movie North Shore, Rick Kane went to Hawaii to try to become a professional surfer. Rick had nowhere to go, but was fortunate enough to meet the owner of Chandler Surfboards. Chandler taught Rick everything he needed to know about surfing, and Rick designed a new logo for Chandler Surfboards. The new, improved logo appears on this t-shirt!

Everyone will know that you are a fan of the 1987 classic when you wear this 80sTees.com exclusive White Chandler Surfboards North Shore t-shirt! I am a sucker for the “lost soul finds mentor then achieves major accomplishment” theme in movies. My ultimate favorite is The Karate Kid, but thanks to HBO I was able to watch the similarly-themed North Shore tons of times.

North Shore is so strikingly similar to The Karate Kid that it had to be intentional. The “kid” moves to a new place, ends up meeting a girl and having trouble with a gang that has ties to the girl, and then finds a wise mentor who helps him to achieve success and earn respect by competing in a tournament.

The thing is, the movie is still very entertaining so who cares if the story has been told before? And there are enough differences to make it interesting.

Rick, the Arizona wavepool surfing champion, is also a graphic designer and after several attempts designs an awesome new logo for his mentor’s surfboard company. The Chandler Surfboards logo was made into t-shirts in the movie, and we have recreated those tees!

I really love these tees because they look like a real surfboard company tee, and therefore only true fans will get what you are wearing. I’ve been stopped before with people asking me where I got it, and in fact it even happened one time when I was on vacation in Maui!

Here I am sporting the tee. That was an awesome wave, LOL! 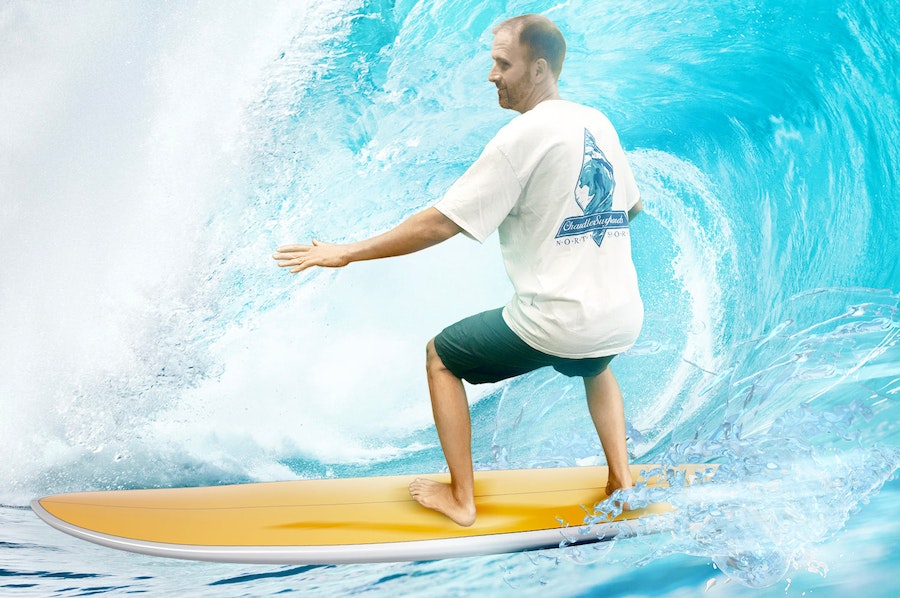 I’m wearing an XLT and the fit is a bit looser than other XLTs in my closet. The regular non-tall sizes are pretty standard, but if you are thinner and you order a tall size just know that it might be a looser fit than our other tees.

If you are a fan of the movie North Shore this is not only a great shirt but it’s a way to see if anyone you pass on the street is a super fan too!

Made of:  Pre-Shrunk Cotton

Pre-shrunk to maintain a good fit (In case your Mom didn't tell you, all cotton shrinks in the dryer, even pre-shrunk).

Fabric Softness:   Standard
T-shirts of STANDARD SOFTNESS are composed of traditional material and are considered to be your standard weight classic T-shirts.

Best site for every t-shirt fan in the family

A great place to find awesome and hilarious t-shirts.